We’re coming up on the 10th anniversary of the dedication of San Antonio’s first Solar Power Station. Designed as an educational installation, this modest (by today’s standards) 14 kilowatt photovoltaic array was installed on the grounds of the Institute of Texan Cultures (operated by the University of Texas at San Antonio) in downtown San Antonio. On November 19th, 2003, dignitaries arrived to throw the switch that allowed solar energy produced by the installation to be fed into the CPS Energy grid for the first time. The photos that accompany this post are taken during the final days of construction and on opening day when the first group of school children were introduced to the basics of solar energy. The building that housed the inverter and other equipment also included three interactive windows describing solar energy and indicating how much energy was being produced at that time along with another readout that indicated how much energy that the system would produce at the same time under ideal conditions. That way, if the actual energy output was half of the ideal output, those who were looking at the display could then determine the impact of atmospheric conditions accounting for the energy drop.

I would have liked to go out to the Solar Power Station on the 10th anniversary of its dedication to see how much energy had been provided to the city over the past ten years, but I found out that recently the installation was demolished. Very few knew about the demise of the Solar Power Plant, but no one had apparently fought to save it. I have been able to piece some of the back story though. A few years ago, UTSA had sold the parking lot of the Institute including the portion of the grounds where the Solar Power Station was installed to a private company. At that time, CPS Energy made attempts to remove the installation in order to locate it elsewhere and continue it’s educational role. Relocation efforts were halted by UTSA, and very recently, the new owners of the property decided to take the Solar Power Plant down. I still have not found out what happened to the 198 panels, the inverter, or the educational boxes, but I hope they will be able to continue producing energy wherever they are. 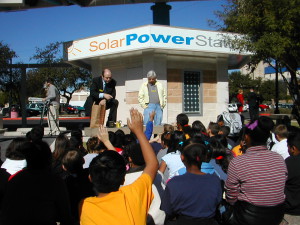 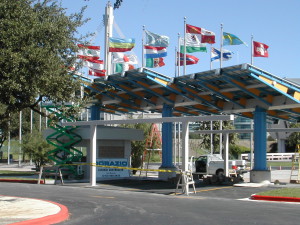